The First Reformed Church of Pompton Plains in Pequannock was built before there was a United States of America or a State of New Jersey. When the first Dutch settlers came in the early 1700s and gathered to worship in what today is Pequannock Township, there was no delineated separation of church and state. Similar to many colonial settlements, the church was established before the government.

The year was 1706. In that year, Ben Franklin was born. In that year, the colony of Jamestown in VA was founded. In that year, the population of the American colonies is just under 300,000. It would be nearly two generations before the Revolutionary War started. In that year the Dutch living in Pequannock Township began meeting together in homes for simple worship services and the first baptism was recorded. 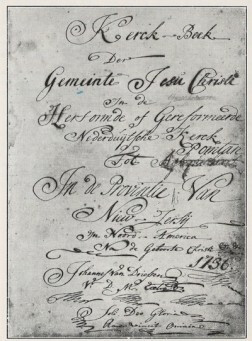 From then, the size of the congregation increased and an ordained pastor to serve the religious needs of the congregation.  So, the church formally organized on April 7, 1736, built a structure along the east bank of the Pequannock River, and called the first minister, Rev. Johannes Van Driessen. He was the first Dutch preacher in America to have not been trained, licensed and ordained in the Netherlands, which had significance for the whole denomination at the time. Stone steps from the original structure can be seen outside the passageway between the present Sanctuary and the Church House Ministry Center.

In 1769 the congregation built a new Sanctuary on its present site and began to establish a campus around which the Pequannock Township community would be built. In 1870, it was enlarged to include an alcove.

Although slavery was still legal in NJ until 1804 and some held slaves as late as 1865, the church made a decision early to open its services to all races of people who it would receive as baptized members in “full communion,” which was progressive at the time.

The spiritual life of the community was greatly enhanced by two movements in the 1800’s. The “Sabbath school” started in l837 by planting four schools in different districts - Pequannock Chapel, Lincoln Park Chapel, and the Jacksonville Chapel – and eventually these chapels became independent churches.

The second great movement was the “Women’s movement”.  The Women’s Missionary Society and the Women’s Chapel Association were very active. In 1877 the women of the Chapel Association bought the property and paid for the building of Grace Chapel. The Ladies’ Missionary Society was organized with 18 charter members who promised to bring the benevolent contributions of the church to a higher standard and to cultivate a deeper sense of missionary obligations among the congregation.

As the congregation grew, they needed more space. So, in July of 1926, the cornerstone of the Church House Ministry Center was laid in order provide a place for the congregation to gather in fellowship, to provide offices for staff, and to provide classrooms for education.

Then, on Sunday morning at about 7 AM on Oct. 24, 1937 the Sanctuary caught fire and burned down, with only the outside walls remaining.  The congregation raised funds from the whole community area and built our present Sanctuary, dedicating it in April of 1939.

The middle of the 20th century brought great growth of The First Reformed Church of Pompton Plains. There was also increased interest in local and global missions.  As the progressive congregation in the heart of the Township, the church was instrumental in joining others in the community to start Pequannock Valley Mental Health Center (which became NewBridge Services), senior citizen housing (which became Hearle Village), the FISH program which helped local residents in need, and encouraged the building of a local hospital directly catercorner to the church campus (which became Chilton Memorial Hospital).

In 1956, the church purchased the property and the historic stone house built in 1788 located at the south end of the campus as a home to the church’s Senior Pastors. They named this house, “Friendly Manse.” 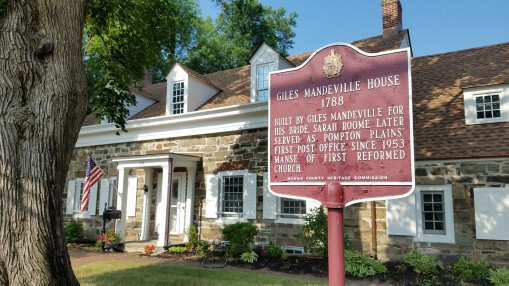 In 1965, Friendship Hall was built and property to the north purchased next to Grace Chapel which gave the church the whole block from Sunset Road to Wilrue Parkway. In addition, during this time period the pastorate of the church increased from one pastor to two pastors to two pastors and a Director of Christian Education.

A historic decision was made in 1972 when a motion was made and accepted by the consistory (ruling board) stating “That nominations be made open to eligible women (as well as men) for positions on the future consistories.”  The first women were elected to the consistory the following year.

In 2006, about 35 years after women were able to be elected as members of the consistory, The First Reformed Church of Pompton Plains called Rev. Kathleen Edwards Chase to become its first female Senior Pastor. Pastor Kathleen served as our Lead Pastor from 2006 to 2021.